Tweet Leads to Suspension: What Students and Adults Need to Learn From It

I’m betting that Hilbert senior April Gehl is a good kid. She obviously has some serious skills on the basketball court, averaging 15.8 points per game and 5.5 rebounds this season. She is also smart, as illustrated by her 3.5 GPA.

But she took to Twitter on January 4th to express an opinion, and now she gets to watch from the bench as her team plays the next five basketball games. She was suspended by her school for what that tweet said (Eat S#%t – but she typed it out the real way), and who it was directed towards (the WIAA).

April was responding to a letter from WIAA to schools across the state in regard to sportsmanship and negative chants toward opposing teams. Cheering for teams is one thing, but degrading the opposing team is another. The letter encouraged schools to take steps to eliminate the use of cheers like, “You can’t do that,” and, “Airball.”

After I read the article from postcrescent.com, my first thought was that five games seemed harsh. Back when I was in school, I think if someone got caught drinking alcohol, the suspension was only two games. It was the same for failing grades – get your grades back up and just miss two games.

Upon further review, maybe this type of consequence is exactly the message that needs to be sent. Social media gives us all the ability to share our thoughts, feelings, pictures, videos and more in seconds, from wherever we are in the world. Just because we can share it, does it really mean we should?

The lesson to be learned from all of this is this? Consequences. They are real. Now, most of us don’t have a team from which we can be suspended. What we stand to lose is so much more.

The words we use, and what we choose to like, retweet, and comment on social media sends a message of who we are. In this world of instant communication, it doesn’t take long for our thoughts to reach thousands.

I do believe in the first amendment. We are entitled to freedom of speech. But it’s so easy to be kind. So simple to send out positive messages; why can’t we see more of that? The general letter that started all of this from the WIAA was simply trying to promote more kindness in the world. Cheer for your team instead of taunting the opponent.

What can schools learn?

The story at hand has played itself out many times across the country. Students suspended or expelled due to messages on platforms like Facebook or Twitter. The school obviously felt they could make the ruling, but many times they found themselves with a lawsuit in their hands. Check out this 2011 article that highlights those cases “Social Media and Students Discipline in Public Schools.”

It appears that the Gehl family doesn’t plan on appealing the suspension. And even if they did, the five games that April has to miss would surely be in the past by the time it went through the legal system. So what action should schools take to be ready for this? Based on my work in helping schools with social media, I believe there are two main things.

Establishing a social media policy is one part. If you have one, it’s probably time to revisit it. If you don’t have one, it is certainly a great time to get started. Consult with your legal counsel in the development of the policy. In the end, you want to create expectations that are well understood by students, parents, and teachers.

The second, and I believe the most important part, is to educate our students on the notion that what we say online matters. I’ve talked to hundreds of students about this topic and my analogy to posting online goes something like this. Imagine that every text, tweet, and snap that you send is linked directly to the light-up message sign in front of your school. The announcements that it usually shares now suddenly shares your name along with the image and message you just sent out on your smartphone.

Are you proud of what that sign says, or are you embarrassed? When asked, the students usually get a look of “I never thought about it like that.”

With that mindset, I go on to challenge kids to use social media as a platform to change the world in a good way. I think our young people get bombarded with messages of don’t do this or you can’t do that. What about showing them examples of other young people that have made major impacts around the world by using the power of social media?

We all have the power to make this world a better place. Our students should be empowered, encouraged, and supported!

This week, I watched a touching tribute to the incredible work of Ellen DeGeneres. She has raised over $50 million dollars to help people in need, not to mention she makes so many people laugh every day. After being awarded the People’s Choice Favorite Humanitarian Award, she said, “It’s a little strange to actually get an award for being nice and generous and kind. Which is what we’re all supposed to do with one another. That’s the point of being human.” 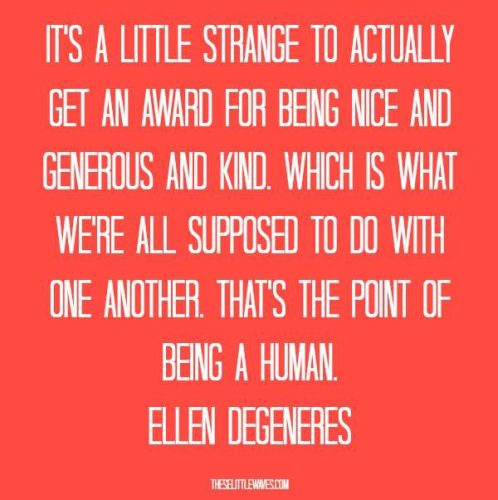 What are your thoughts on the situation? Share them below.

Andrea Gribble is the author of “The Von Awesome Family In A Digital Daze”, available on Amazon in paperback and on Kindle. Her book helps kids understand why technology balance is important from a child’s perspective. Find resources to help your family at www.AndreaGribble.com.

She is also the owner of SocialSchool4EDU.com, a social media training and management company for schools.

Did you find this article helpful? Sign up for my eNewsletter here to receive regular helpful tips, social media advice, and links to resources you can use in your school.

Subscribe to our free email newsletter and stay up to date on post ideas, our latest blog, and more resources to inspire and empower you on your school social media journey.

In our recent School PR Survey, we discovered that most school social media managers are focused on increasing engagement on their pages.

This free resource will help you inject fun and spark positive engagement on your posts! Grab 52 questions that will earn comments, inspire nostalgia, and connect your community.